Since its founding in 1906, the Armenian General Benevolent Union has recognized the vital role of education in the self-preservation and sustenance of the Armenian people and the Armenian cultural heritage by establishing, funding and operating hundreds of schools in historic Armenia in the pre-1915 period and in the Diaspora after the 1920s. As the Armenian community increased in Southern California during the quarter century after World War II, so did the need for Armenian schools. A group of dedicated individuals representing the AGBU and St. Peter Armenian Apostolic Church formed an exploratory committee to lay the foundations of the new school, which opened its doors on the grounds of St. Peter Church, in February 1976, with an enrollment of nineteen students and three teachers.

By 1980, Student enrollment had increased to 129 students, preschool through 6th grade, and the faculty to 11. In June 1981, the school awarded Elementary School diplomas to its first graduating class of ten students. This important milestone inspired added trust and confidence towards the school within the community. Student enrollment jumped to 230 the following year and Middle School grades were added.

The physical capacity of the school next to St. Peter Church was no longer able to accommodate the increasing student population, nor could it meet the program requirements of a Middle School level school. This challenge was met by the rental of a vacant public school facility from LAUSD, located at the west end of Canoga Park, and the school moved there for the 1982-1983 academic year.

As enrollment continued to increase, reaching 300 students in 1985, the search for a permanent school facility was initiated, with encouragement and support from Mr. Alex Manoogian. It was not an easy task to find a suitable location that would be geographically central as well as meet the present and future needs of the fledgling school. Fortunately, a closed-down public school building in Canoga Park, with a more central location, was available for sale in early 1986 with the purchase price of three million dollars.

The prospect of a large, AGBU-owned school facility generated a great deal of excitement in the community. Mr. Alex Manoogian added to the momentum by pledging two million dollars, provided the remaining one million would be raised by the community. The School Board, Parent Teacher Organization and the community mobilized their resources to achieve this great objective. Finally, the dream became reality with the purchase of the 6.3-acre school complex, located at 6844 Oakdale Avenue, Canoga Park, and the school moved to its permanent campus on July 1, 1986. In September 1986, St. Peter-AGBU School opened with 414 students as a complete Preschool and Elementary through High School educational institution, eager to send its first graduates to college. It was evident that the school had taken a new direction, inspiring new confidence in parents, students, and supporters. Indeed, before the first year was over, plans began to be drawn for a school expansion project in order to equip the school with a state-of-the-art high school building, where students would engage in a rigorous college-prep education in an Armenian and family environment.

In recognition of Mr. Alex Manoogian’s inspiring leadership and contributions, in February 1987 the Board of Trustees resolved to rename the school as AGBU Marie Manoogian School, in honor of Mr. Manoogian’s spouse, Mrs. Marie Manoogian. 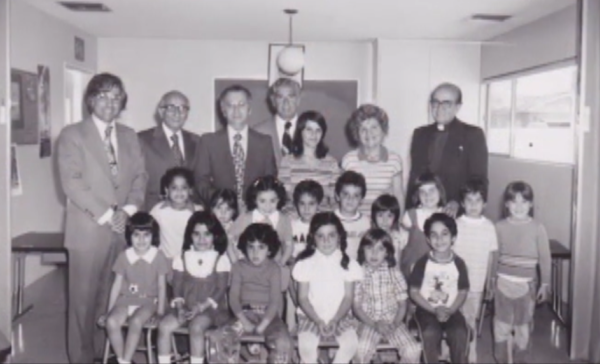 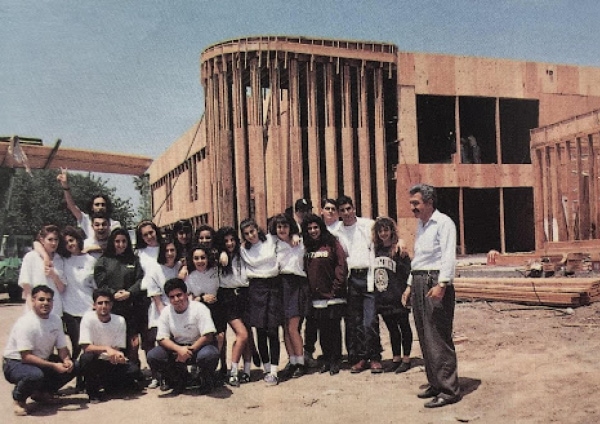 The seven students of the first graduating senior class were awarded High School diplomas in June 1987 and were followed by classes of 8, 11, 18, 24 and 30 graduates between 1987 and 1992, heralding a growth pattern that would continue during the following years. Having outgrown its classroom capacity, the Board of Trustees and the Building Committee began to consider options available to expand the physical capacity of the school.

Once again Mr. Alex Manoogian came forth with his support and encouragement, pledging additional financial resources and commissioning renowned Detroit architect Mr. Osep Sarraf to come up with a conceptual design, consisting of a separate high school building of twenty classrooms, labs, and faculty rooms; a gymnasium-multi-purpose hall and cafeteria structure; and adequate subterranean and surface parking for 200 cars.

Mr. Sarraf’s conceptual design was developed into working drawings by the architectural firm of Morris Verger and Associates and under the watchful guidance of the Building Committee, building permits were obtained and construction of the ambitious five million dollar project began on December 29, 1991.

Noted philanthropists Mr. & Mrs. Sarkis and Seta Demirdjian of Lebanon made a substantial donation of $1.25 million which, when added to the original construction fund capital of $2.5 million donated by Mr. Alex Manoogian, was sufficient to bring the high school and parking phase of the expansion project to completion before school reopened in September 1992. In recognition of the magnanimous donation of the Demirdjians, the middle and upper school division was renamed as Sarkis and Seta Demirdjian High School.

After succeeding her father as AGBU President, Mrs. Louise Simone made the continuous enhancement of the school’s academic standards a major condition to be met by the administration and faculty for the expansion project to be worthwhile and of enduring significance. In May 1992, the school received full accreditation by the Western Association of Schools and Colleges (WASC), coming one step closer to Mrs. Simone’s vision of seeing our school in league with the best private schools in the area.

The last phase of the expansion project, the gymnasium-cafeteria complex, was completed a year later thanks to the $1 million donation by longtime AGBU donors the Nazarian brothers, Nazar, Noubar and Garbis, of New Jersey and Lebanon.

In 1996, the school community celebrated the 20th anniversary of the school, and on that occasion, a permanent School Endowment Fund was established through the generous donation of $100,000 by the Manoogian Family and the fundraising efforts of the Parent Teacher Organization, which raised an additional $100,000. The Endowment Fund is close to one million dollars at the present time.

The year 2001 marked the Silver Anniversary of the establishment of the school. By then, the school had over 500 high school graduates and enrollment stood at 950 students.

During the following years, the school went through two more major expansion phases. The Elementary division was enlarged by a 6-classroom building to accommodate smaller class sizes in 1997 and the High School building was enlarged by the construction of the Sinanian Annex in 2006, adding 9 classrooms and a faculty lounge to that facility.

The 30th anniversary in 2006 was the occasion of a major fundraising effort for the planning and construction of a new addition to the Preschool facilities. The project was completed and inaugurated during the following year in the presence of major donors Mr. and Mrs. Nazar and Artemis Nazarian and the Preschool was renamed as AGBU Artemis Nazarian Preschool.

The School’s 35th anniversary was celebrated in 2011, with a renewed emphasis on the enhancement of technology and its integration in the teaching-learning process. Thanks to this fundraising effort, all classrooms are now equipped with SMART Boards, in addition to Elmo projector units and computers. There is a project nearing completion which is bringing the school to the cutting edge of data and communication technologies with the installation of an internal fiber optics network. This will enable the use of a consistent, school-wide, high-speed network capable also of high-speed Internet access.

Through earmarked donations, an impressive range of scholarship funds have been established by parents and friends of the school to recognize excellence and high achievement among graduating senior class students. To date, the school has graduated several seniors with perfect SAT scores, as AP National Scholars and National Merit Scholars. High School graduates have enrolled in all University of California campuses, private and public universities in California and other states, and Ivy League schools like Harvard University, Stanford University, Brown University, Cornell University, and UPenn.

The 2019-2020 academic year became part of history as it was the first year in the history of the school that all graduating students in kindergarten, elementary, middle & high school did not get to participate in a traditional graduation ceremony.  Our campus, along with many others in the nation, had to be closed unexpectedly in March of 2020 as the world grappled with the Covid-19 pandemic.

Distance Learning became the new normal and we were forced to end the school year without many of our beloved traditions and events such as the annual Gala, Senior Last Bell, Senior Banquet and commencement ceremonies.  Our Administration and the MDS community came together in unwavering support and determination and made the most of the  circumstances.  With masks and social distancing protocols, our students and families were able to have a drive-through graduation ceremony and watch their children receive their diplomas in caps and gowns

The 2020-2021 school year marks the 45th academic year of AGBU Manoogian-Demirdjian School. Despite challenges presented by the Covid-19 pandemic we remain committed to continuing to chart new grounds and exceed expectations in academics, sports, the visual and performing arts, technology and extracurricular activities.

We have gained new knowledge and strength to serve the developmental and educational needs of our Armenian youth in the caring, quality and safe environment that the school has provided for its students since its inception in 1976. 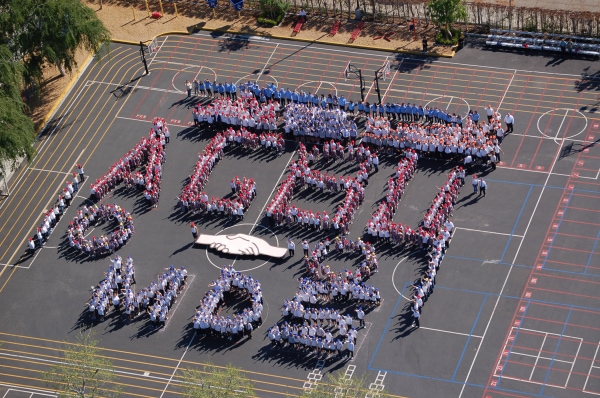 We Prepare Students For Success In Life